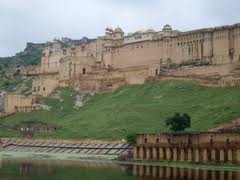 Amber Fort is located in Amer (a town with an area of 4 square kilometres (1.5 sq mi)), 11 kilometres (6.8 mi) from Jaipur, Rajasthan state, India. It is one of the principal tourist attractions in the Jaipur area, located high on a hill. Anber Fort Was Built By  Raja Man Singh I. Amber Fort is known for its artistic style, blending both Hindu and Rajput elements. With its large ramparts, series of gates and cobbled paths, the fort overlooks the Maota Lake, at its forefront.

The Amber Fort was built by ‘Raja Shri Maan Singh JI Saheb’ (Maan Singh I) (December 21, 1550 – July 6, 1614) in 16th century. Man Singh, one of the first war chiefs or the trusted general of the Emperor Akbar. Akbar included him among the ‘Navaratnas’, or the 9 (nava) gems (ratna) of the royal court. Man Singh began the construction of a fortress-palace of white and red sandstone i.e. Amber Fort in 1592. He was the Kacchwaha (Rajput) of King of Amber, a state later known as Jaipur. Nearby he ordered to set a small temple devoted to ‘Sheela Mata’, his patron goddess. 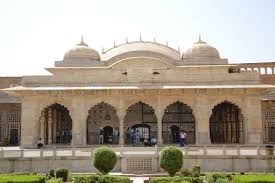 Diwan-e-Aam or the ‘Hall of Public Audience’ is a beautiful hall stands on two rows of ornamented pillars and opens on three sides. It is said that king used to listen about needs and complaints of General public. ‘Diwan e-Khaas’ or the ‘Hall of Private Audience’ has delicate mosaic work in glass. In this hall, king used to meet special guests from other states, ministers, and his friends. 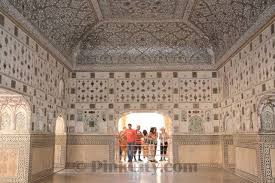 Sukh Niwaas, which is opposite to ‘Diwaan-e-Khaas’ having doors made of sandal wood and ivory. There is a channel running through the hall, which carried cool water that worked as an air cooler, with the aid of breeze. In this artistic hall cool climate was artificially created. It is said that the kings used to spend time in this Sukh Niwaas with their queens and sometimes with their mistresses that is why it is known as the residence of pleasure or pleasurable residence in English.

The Sheesh Mahal (Mirror Palace) is the most famous and beautiful part of Amber Fort. You must remember the song of the famous bollywood Classic Film ‘Mughal-E-Azam’ i.e. “pyaar kiya toh darna kya”, yes, it was shot in Sheesh Mahal. That song filmed beautifully but the all credit goes to the beauty of Sheesh mahal. The Walls and ceiling of this hall is carved with beautiful paintings and flowers and that too made with pure glass. The reason behind why this hall was made by glass because in ancient days the queen was not allowed to sleep in open air but she loved to see the stars shining. So the king ordered his architects to make something which could solve the purpose. The most stunning thing about this hall is that if someone burns two candles, then the reflection converts that small light into thousand of stars.

Everything all about Amber Fort – Jaipur Pinkcity